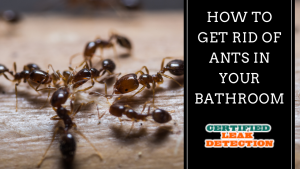 Central Floridians usually expect their homes to be invaded by relatives and friends during the summer months. To be fair, these visitors are (hopefully) invited. However, visitors of the small, six-legged variety also tend to show up, albeit, unbidden. While the Sunshine State’s abundant insect life often crosses paths with people, their presence in your home may indicate a serious problem. For example, ants in your bathroom could be a sign of a plumbing leak.

As discussed in our August 2018 blog post, plumbing leaks can have a number of sources. If the source of a leak is a pipe concealed behind a wall, you may well see the ants before the damage becomes apparent. Ants can enter your home looking for moisture and an accessible food source – and can be attracted by rotting or damp wood that has mold damage. They often enter through cracks around windows or doors, but may also be able to get in through holes for wires.

While not every ant infestation is caused by a plumbing leak, identifying the little culprits and using the process of elimination can help make your bathroom pest-free – as well as alert you to a problem that needs to be addressed, if taking the measures described here fails to send them packing.

What types of ants are in the bathroom?

Different types of ant species can infest your bathroom. Of course, all of these species don’t infiltrate your home simultaneously. Common Florida ant species include acrobat, Argentine, carpenter, ghost, pavement and pharaoh. Turfmaster Lawn Services provides a convenient guide to Florida ants – including close-up color photos, their habitat and conditions that attract them.

Of all the ant species, the presence of the carpenter ant should be of particular concern. A carpenter ant infestation within a building usually means that there is a moisture problem. They’re often found around dishwashers, sinks, laundry areas and bathrooms – especially where plumbing leaks.

The carpenter ant doesn’t actually eat wood. It causes damage by excavating tunnels and galleries inside rotting wood in which to nest. Over time, this will undermine your home’s structure much like a termite infestation.

We may be getting ahead of ourselves, but eliminating carpenter ants requires the services of a licensed pest control operator. This is not a DIY job using homemade remedies – although we’ll provide a few of those for use against the other ant species. This will be part of a larger project that includes removing and replacing the rotted wood, as well as repairing the source of the leak that caused the initial wood damage.

What attracts ants in the bathroom?

In addition to plumbing leaks, ants can be drawn to stagnant water, grease and human hair that’s been allowed to collect in drain traps. Basic good housekeeping and home maintenance should prevent infestations if leaking pipes aren’t an issue.

Getting rid of bathroom ants

Evicting ants permanently requires eliminating their colony – which is where they nest and bring back food and water. Hiring the services of a professional pest control company is the most efficient means of doing so. Using commercially produced bait stations sold in stores and placed according to instructions is another effective option.

For those who are concerned about the use of toxic chemicals in their home, or cost, here are a few of the aforementioned natural methods.

Essential oils – Mix 15 drops of peppermint oil with 15 drops of tea tree oil in a spray bottle. Add six to eight ounces of water and half a teaspoon of cayenne pepper powder. Mix thoroughly to dissolve the cayenne powder. Dip a cotton ball in the mixture and place it near the source of the trail.

Borax – Kill ant nests and colonies in the walls around pipes with Borax powder. Use a disposable caulking gun to pump Borax into the wall by way of the space around pipes underneath the sink. CAUTION: Borax can be harmful to humans and pets, so apply carefully.

Vinegar and baking soda – To get rid of ants in drain pipes, pour 1/2 cup of baking soda down the drain. Follow the baking soda with 1/2 cup of white vinegar. Let the solution bubble inside the drain for 10 minutes to loosen food and grease residue. Follow by heating one quart of water to a boil in a cooking pot. Slowly pour the boiling water down the drain to kill ants inside and remove the substances attracting them.

Whatever method you use, make sure that you’ve eliminated plumbing leaks as the initial cause of ant infestation. Certified Leak Detection has over 30 years of experience in locating and repairing leaks in concrete slabs, foundations and underground plumbing – as well as swimming pools, pool decks, spas and fountains in homes and businesses throughout Central Florida. Contact us to learn more, or schedule an appointment.

Your pool will naturally evaporate certain amount of water, and you’ll lose some water to splash-out or to backwash waste-water. About 95% of phone calls received from worried pool owners about a leak end up being economical to fix. Also 90% of all leaks are minor and can be patched using underwater sealants and epoxies thus making our service affordable. We provide pre and post swimming pool assessments to ensure pool buyers and swimming pool sellers are equally secured from the devastating impacts of a swimming pool that leaks water.

“Certified Leak Detection only uses certified pool contractors to detect swimming pool leaks, foundation leaks, as well as leaking plumbing and equipment and you should too. Protect yourself and your investment hire a Certified Pool Contractor.”

We are an Orlando-based family-owned business, and leaders in servicing commercial and residential water leak detection needs for pools, spas, and fountains. We also locate evasive leaks in concrete slabs, pool decks, and underground plumbing.

Certified Leak Detection uses the most professional certified pool contractors in Orlando, including Robert Cant CPC1457859, Jamie Schenk CPC1457482 and Thomas Yeaman CPC1457353 to make pool repairs, refinish and remodel all pools. We highly recommend these pool professionals on all of your swimming pool repair and renovation needs in Orlando, Central Florida, and all across Florida!

Monday – Saturday : 7am – 9pm Call (321) 303 9910 for appointment or fill out your info"Contact Us" page for an estimate. Please include your address in the Message* portion of the form. We will reply within 24 hours.